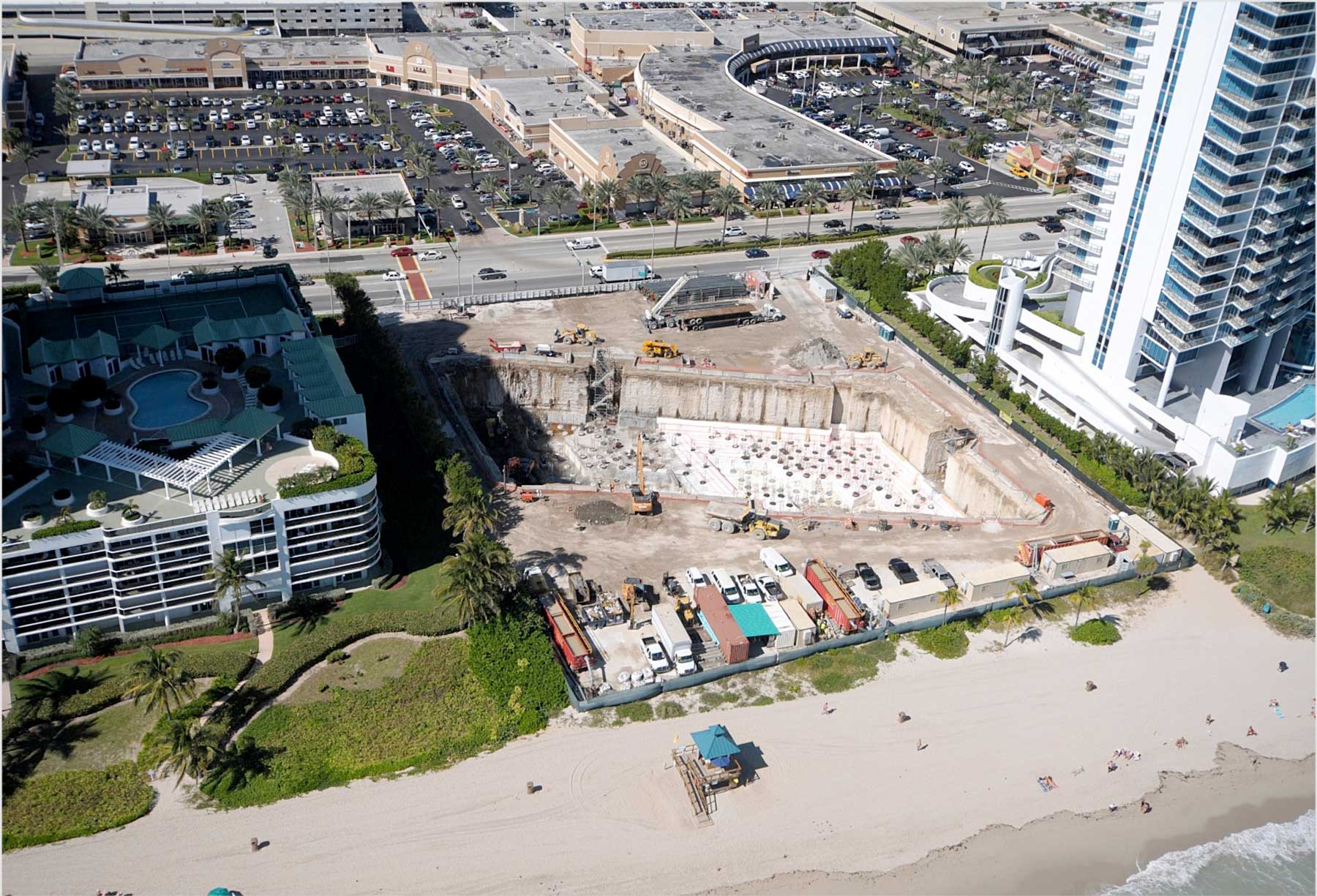 Malcolm Drilling just finished the foundation work for “The Jade Signature,” one of Miami’s newest high rise buildings currently being constructed by Suffolk Construction. This 57-story luxury condominium project is located on the Atlantic Ocean coastline in Sunny Isles Beach, Florida. One of the many unique aspects of this project is its 3-levels of underground parking, a first of its kind for the low lying coastal areas of South Florida, called for a one of kind design to address below water level construction.
The project site sits directly adjacent to the Atlantic Ocean, with groundwater located almost immediately below the surface. The project geology included approximately 15-ft to 30-ft of beach sand, a 10-ft layer of peat overlaying layers of porous limestone and sand which allowed water to flow freely through the ground and the project site.

Malcolm implemented Deep Soil Mixing (DSM) as an alternative to numerous sheet pile cofferdams and tremie seals for the construction of the building’s foundation. The unique design called for both the installation of 35,000 CY DSM, to resist hydrostatic pressure acting against the bottom seal along with 1,100-lf of DSM perimeter hydrostatic cutoff. The DSM was successful as it provided a deep (up to 43′), and dry excavation for the subterranean parking around the structure and beneath the remainder of the site. The DSM bottom seal, or plug, was comprised of overlapping soil mix columns extending to depths of 15-ft below the bottom of the planned building excavation. In building this DSM plug, every square inch of the approximately 2-acre site was treated with DSM. A DSM perimeter wall was installed to act as both support of excavation and hydrostatic cutoff. Large, closely spaced steel beams were used to support the wall without requiring internal bracing or tieback supports. An internal, unreinforced DSM wall was installed around the tower footprint, the deepest section of the excavation. Additionally, 317 EA 36-in in diameter and up to 155-ft deep Auger Cast piles were installed. Also, 500 ea. 18-in auger cast piles where installed from original grade elevation penetrating the DSM plug in order to provide the necessary uplift resistance.

For more information about the project please contact Chris Sammon at csammon@malcolmdrilling.com