SR A1A is the north-south Florida State Road that runs along the Atlantic Ocean, from Key West at the southern tip of Florida, to Fernandina Beach, just south of Georgia  It is the main road through most oceanfront towns.

In October 2016, a category 4 hurricane, dubbed Matthew, made his appearance with torrential rain, massive storm surges, and winds up to 145 MPH. Matthew hit Haiti, moved past Cuba and the Bahamas, and then destroyed the coastal areas of Florida, Georgia, South Carolina, and North Carolina. Among the cities impacted by Hurricane Matthew was Flagler Beach, Florida.

Flagler Beach is a seaside community along this coastline that was majorly impacted. There are 6 miles of open beaches, many wonderful fishing spots, oceanfront dining, and endless recreational activities- a true beach town. The coastline took a hard hit. 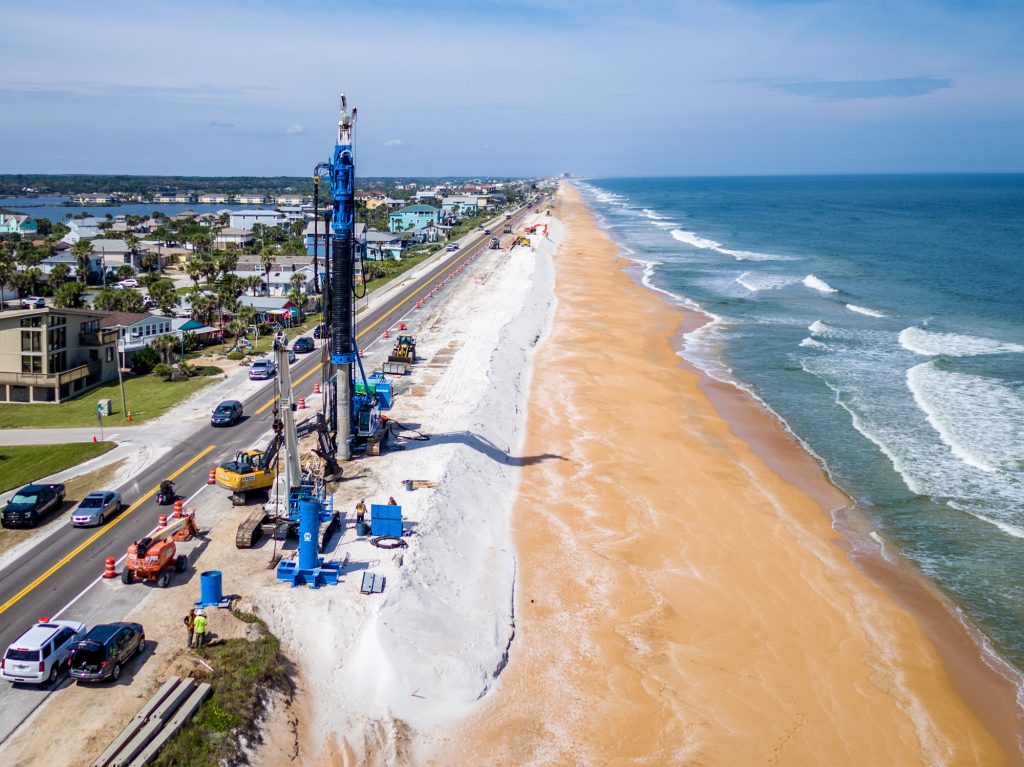 The extensive damage needed to be fixed and the Florida Department of Transportation hired Malcolm as a sub-contractor to Superior Construction out of Jacksonville, Florida for the job.

The goal being to protect the Treasures Roadway from future hurricanes as well as the harsh salt water environment, it was decided to install a one-mile long secant pile wall.

To form the secant pile wall, Malcolm installed a total of 1,847 overlapping drilled piles with a diameter of 36 inches. Due to the very aggressive nature of the salt water on conventional reinforcement cages, the design called for Glass Fiber Reinforced Polymer (GFRP).

Due to the very loose nature of the beach sand, the Cased Auger Cast (CCFA) method was used for the installed of the piles. CCFA piles are installed with a large drilling machine using a double rotary system. These two rotary drilling units are mounted on top of each other and operated counter clockwise. One unit is advancing the casing and the other one is turning the auger into the ground simultaneously. The machinery was engineered and assembled by Malcolm’s engineers in their Los Angeles facility.